We're getting ready to welcome new friends, fans, colleagues, and others to join in our efforts to share soundscape awareness around the world with new social networking presence.

We hope to redesign these pages soon, and are looking for immediate support.  Stay tuned and be among the first to learn more about our exiting plans.

Change is in the air!

We're happy to announce that we'll soon begin efforts on a new, revamped social network for the Soundscape Support Team. As we plan how to offer a better, more enjoyable, more productive on-line experience, build new community, and begin to really work together as a team, we invite your input!

Making the connection with new friends will be a big part of this revitalization of the team.  We'll make room to create a healthy and diverse community habitat…

The fine filmmakers at The Video Project have completed a new addition to the wonderful line of educational media production addressing the most critical issues of our time.  Nature's Orchestra: Sounds of our Changing Planet takes a look at some of the many ways that soundscapes of the wild can inspire creative expression as well as scientific inquiry.  Students of all interests will find something worth learning more about as the short film encompasses ecological awareness,…

If you are wanting to learn field recording yourself or just want to accompany an expert bio-acoustician into the field -  without getting your boots wet - you'll want to read Wild Soundscapes: Discovering the Voice of the Natural World by Bernie Krause.  This new edition is updated with many helpful tips and fascinating topics regarding the natural world from the perspective of…

As Bernie Krause and I often travelled together in the early days of our marriage and, as I began to accompany him alongside into the field on numerous recording adventures, we connected with people around the globe, in some of the world's most remote places.   Upon our return back home, we relied upon the occasional posted letter or rare e-mail from far-away places to keep in touch with some of the friends we made along the way.  As the early years of 2000 passed by, more friends and…

Part of our ever-evolving work in soundscape is to bring people together in appreciation for the increasingly rare wild places of the world.  The WildStore, on the new Wild Sanctuary site, enables visitors to browse a fine collection of recordings from Bernie Krause, friends, and colleagues in the field - hear the sample sounds, and  get a sense of the wonderful work in this growing collection.…

Curated by Soundscape Support Team member, La Cosa Preziosa, this upcoming sound-led program in Dublin is one you'll want to know about.

New members add vitality to the network, so let's all welcome them. (It is a 'social' network, after all!)  If you haven't taken a look at the Members Page lately, check it out -  and find out more about others joining us here.  Today, we welcome newest member, Christine Hass.  Check out her blog at: http://www.wildmountainechoes.com

The great catalyst of biophony and the 'Niche Hypothesis' is finally taking hold.  Around the world, more research, more outreach, and more networking than ever is energizing a world of soundscape interest.

Check out the new 'sound-led' campaign efforts from World Wildlife Fund, Ocean Conservation Research, and NRDC to help keep the Arctic Ocean sustainable for marine life.  How exciting to be in the field - as web-based technologies keep connecting and expanding the possibilities…

We welcome new members of the Soundscape Support Team.

Hey, everyone.  Please check out the wonderful works of our newest members by visiting their page or their site links.  For a quick connect, just pull down the 'members' tab and introduce yourselves on chat or message.  It's all about supporting one and another's work, but of course. Cheers!

Birdsong reduces stress; should it be piped in to town?

In a bid to soothe locals and create 'a better environment' the California town of Lancaster is experimenting with regularly broadcasting birdsong recordings over a 1/2 mile stretch of the downtown streets. Serious crimes fell about 6%. Must be working!  Here's the article: http://online.wsj.com/article/SB10001424052970203721704577157512700171698.html 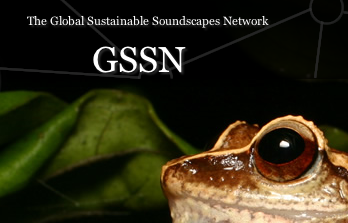 Soundscape Around the World - Can you help?

Hopefully, the Soundscape Support Team Network has been helpful to you.  Now, we ask for a bit of your support.  Can you contribute a little information?

Answering the question 'Who would be interested in this topic overseas?'...We are hoping to gather as many Nature Sound Enthusiasts as possible - plus Soundscape groups, networks, etc, toward compiling a list which will, in turn, encourage our publisher to place  Bernie's upcoming book in Europe, in a variety of…

Amazingly enough, 2011 is almost over.  We trust that you all have had a good year and that your own surrounding soundscapes have been healthy, vital, and life affirming. We're happy to 'ring out the old year' with some wonderful new members.  We look forward to growing our team and offering some interesting improvements to the network as 2012 unfolds.  As always, we wish you all our gratitude for sharing your wonder works, your insights, your time, and most of for all for the extension of…